For nearly 20 years, members of the New Horizons Program at Baldwin Wallace have been coming together to make music, improve their instrumental playing abilities, and build meaningful connections with their instructors and each other. 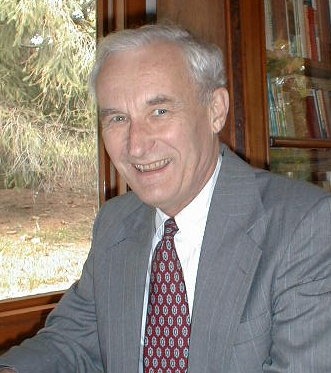 Glenn Blair, Professor Emeritus of Management at BW, is one NHB member who has particularly enjoyed his experience in the program and is not shy about saying so. No stranger to the Baldwin Wallace community, Mr. Blair’s teaching career at Baldwin Wallace spanned decades, where he taught a variety of classes in human resources management, labor relations, and compensation management from 1988-2008.

Glenn joined the New Horizons Band program in 2013 after retiring from his full-time teaching position, looking for a way to stay engaged with the campus community. He played the trombone for only 1 year in high school at the request of his band teacher. Wanting to pick up where he left off, he began in the Bronze Band and was immediately impressed with how the members and music education student instructors brought him into the fold. “They’re amazing,” he says of the student instructors’ ability to guide new members in a variety of instruments.

After diving into the NHB program in 2013, Glenn took his trombone skills into the community, where he played with the brass ensemble at John Knox Presbyterian Church. He also performed in Tuba Christmas on the stage of E. J. Thomas Hall, having taken up the baritone horn as a second instrument for a semester in Bronze Band. Before his reclaimed interest in the trombone, Mr. Blair pursued his love of choral singing as a member of The Cleveland Orchestra Chorus under George Szell and Robert Shaw, and twice performed at Carnegie Hall. 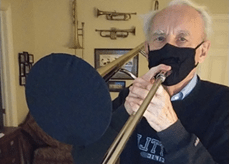 Although the New Horizons Band was unable to meet in person this fall due to ongoing health and safety concerns, dozens of members participated in a virtual project where they met every other week to discuss repertoire selections and musical concepts. Participants in the program were also paired with current BW music education students to engage in biweekly virtual private lessons to focus on preparing a recording they submitted at the end of the semester. Mr. Blair admits that while the idea of participating in a virtual program was exciting and intriguing, preparing and submitting a recording of his playing was daunting at first. “Five years ago, I wouldn’t have had the confidence to click send on that recording.”

Even though the weekly meetings looked different than in past semesters, building connections between future music educators and community members remains an important component of the program. “The single best aspect of the New Horizons program is the tie to the students,” he notes. “They make me proud to have been a part of Baldwin Wallace.”

To learn more about New Horizons Band, visit their webpage.