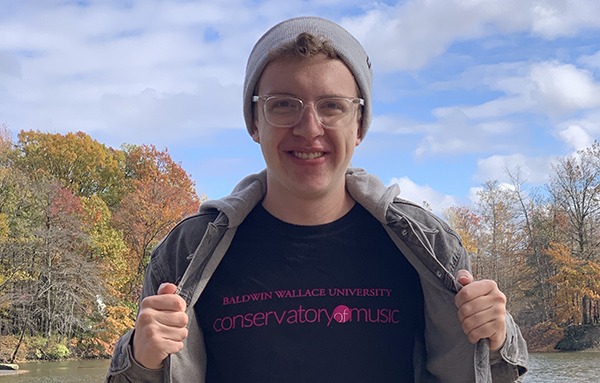 Baldwin Wallace Sophomore, Luke Helwig, found music while watching Shrek 4. “I was watching the fourth Shrek movie, and there was a scene where the pied piper is playing some nonsensical rendition of "Sure Shot" by Beastie Boys. Apparently, 6th grade me thought this was the coolest thing ever, and it had enough influence on me to start playing the flute. Thanks, Beastie Boys.” Truly, inspiration can be found anywhere.

Although he doesn’t know the precise moment he chose to attend BW, Luke does admit it always felt like home to him. He first stepped onto campus in the summer of 2014, between 7th and 8th grades, to attend Band Camp as a relatively new flute player. “I had very limited flute skills and even fewer social skills so naturally, I was a bit timid about going. However, my fear turned into excitement within the first hour, most likely due to the open and welcoming environment which was characteristic of the entire Community Music School staff then, and the entire Community Arts School staff now.” 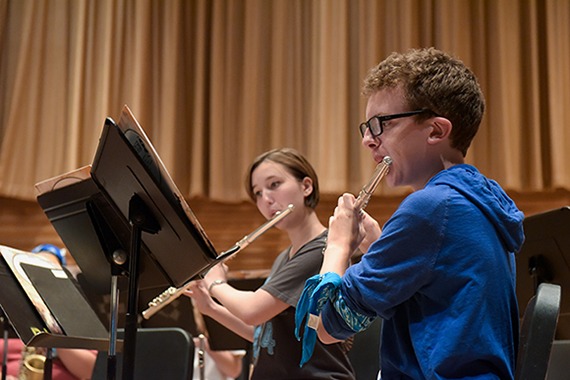 Since that first summer, he has been involved with CAS in some way each year. This includes attending Conservatory Summer Institute, participating in the Youth Honors Wind Ensemble, Orchestra, and Jazz Band, and later, serving as a counselor/staff member for all the camps he attended as a student. This past summer, Luke also served as a counselor for the Conservatory Virtual Institute, which was offered in an online format to high school students.

His involvement with CAS helped contribute to his decision to major in Music Education and minor in Business Management. “CAS is what truly sparked my passion for music, teaching, and management. As a student at BW, I love that I have an organization like CAS on campus to further my education in the form of real-world teaching and managing experience. The atmosphere created by CAS is open and accepting for everyone who is interested in enhancing their own artistic experiences,” he says.

Lastly, when reflecting on his experience with the Community Arts School, Luke adds, “Participating in camps and ensembles through CAS not only helped me improve as an artist, but also as a teacher and a strategist. As a young flute player, the camps and ensembles pushed me to build on my own skills as a musician. However, I especially benefited from working as a counselor and staff member. While working for CAS I have learned so much about personal responsibility and organization, which are two skills I lacked early in high school.”

While we know Luke will have continued success at BW and will realize his future plan to earn an MBA, we hope he remembers his roots at CAS. It is students like Luke that help us to be successful.