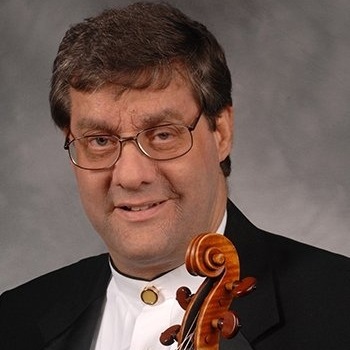 Dr. Julian Ross is professor of violin, chair of the string department and violinist of BW’s resident ensembles, The Elysian Trio and Lyceum2.

An uncommonly versatile artist, Ross has appeared as soloist with orchestras and wind ensembles in a broad spectrum of repertoire, ranging from standard Baroque and Romantic concerti to world premieres of new works that he has commissioned.

His professional orchestral posts have included concertmaster of the Tallahassee Symphony and the New Hampshire Symphony. As chamber musician, he has toured in the U.S. and abroad as founding member of the Arcadia Trio and with the Boston Musical Arts Consortium, the Music from Yellow Barn Tours and the Memphis Piano Quartet. Ross participated in the Yellow Barn Festival for 11 years and was on the summer faculties of Brevard, Aria International Summer Academy, Tennessee Governor’s School and the Blue Mountain Festival.

Ross has been honored to perform many works under their composers’ supervision, including music by Don Freund, Stefan Freund, William Bolcom, John Cage, Chen Yi, John Harbison, Krzysztof Penderecki and Charles Wuorinen. His own original compositions have been received warmly by audiences and are being performed with increasing frequency.

Before coming to BW, Ross served on the faculties of Memphis State University and Florida State University. A devoted teacher, he recently composed a set of etudes addressing tenacious violinistic problems and is currently developing a melodically reinforced approach to scale studies. His students have won competitions, earned leadership positions in professional orchestras, established themselves on teaching faculties and continued studies at major music schools.

In fall 2018, Ross began leading the Baldwin Wallace Community Art School’s string orchestra. He will be guiding talented high school musicians to perform in small and large ensembles without a conductor.