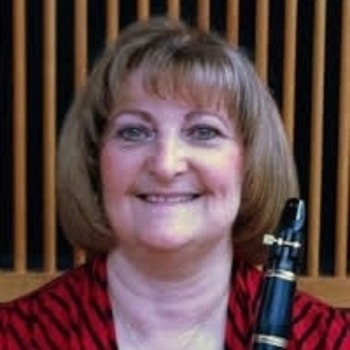 Mary Ann Grof-Neiman received her Bachelor of Science in Music Education degree from the Bowling Green State University. Ms. Grof-Neiman has served as principal clarinetist with the Sounds of Sousa Band and as clarinetist for the Blossom Festival Band, the Cleveland Winds, Lakeland Civic Band, Lakeside Symphony Orchestra, Youngstown Symphony and Erie Philharmonic. She currently performs with the Chagrin Falls Studio Orchestra, the Cleveland Philharmonic Orchestra, Lakewood Home Town Band, and Medina Community Band, where she serves as band librarian. She maintains private studios at Baldwin Wallace University Community Arts School as well as her home in Medina. She has served the Ohio Music Education Association as a Woodwind Adjudicator for over 30 years and is a member of AFM Local 4. She resides in Medina with her husband Marcus and their cat Dmitri.